For years the Raven was my power animal. I could feel him with me, he sat on my shoulder often, and he was just with me most of the time.
He was with me, and helped me, while I was exploring my spiritual path, doing rituals for the first time, doing circle work and so on.
Then, one day I had a session done by someone. I cannot remember what it was called, but very similar as hypnotherapy where you go back in time to heal things and go through certain things again from past lives to sort them out. Due to having had epilepsy it wasn't recommended I do that. But what this man did was very similar, just that HE did the work for me, with his guides, mine, and a pendulum and charts. It is a proper study and so the charts were very specific and helped to get deeper / higher.
He came across things he'd never come across at all with a client. Story of my life, hihi. One of them was that upon separating from source one of the 'petals' hadn't opened properly. This was fixed.
Anywho, after the session, which had taken several hours, I was on my way home and suddenly I knew and felt my Raven had gone. He had fulfilled his purpose and wasn't needed anymore.
I cried. I felt a void, and sadness. I missed him. I knew it was okay, that indeed he didn't belong with me no longer, but it still was sad, it felt like a deep loss.

I used to have a gorgeous Celtic design silver Raven pendant, quite a large one. I wore that every day for years.
But when Raven had left it didn't feel right anymore. I took it off and haven't worn it since. Once I tried it on, but it felt wrong so I took it off again.
Since, I haven't had a regular power animal again.

The pendant was like this, difference being I had the large one, this is small: 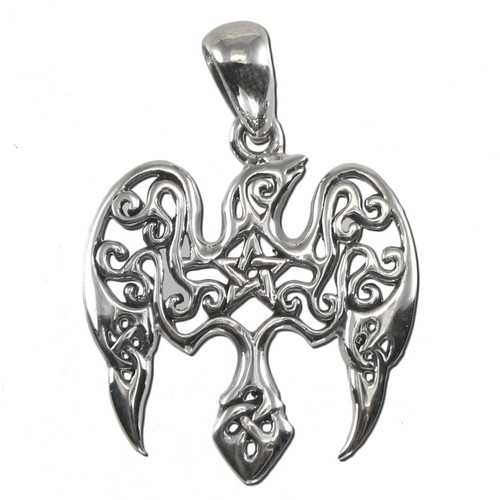