Some 8 years ago, possibly even longer, the crystal shop had vivianite from Australia. There was a slab that absolutely drew me in, but I had to make choices due to small budget and I didn't buy it.
I regretted it and it kept coming up every now and then.
A few weeks ago I suddenly felt vivianite come up time and again, very strongly so.
In the end I decided to search online for it as the shop doesn't have it anymore as it's so rare. Again regret I hadn't bought the slab. At the time I did not know it was this incredibly rare!
Anywho, I couldn't really find any online. Either sold out or just nothing. Well, the Romanian or S-American version, which is entirely different and does not appeal. 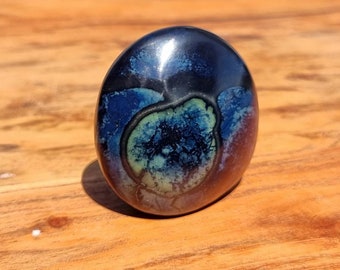 I decided to get a cabuchon on Ebay, the only Aus. vivianite I could find for sale. Better something than nothing and they were pretty. But... I was a split second too late when the auction ended for the one I wanted.
I was narked but intuitively knew/heard I was going to find something better.
So days of more searching online, it began to drive me up the wall.
And then... I found an Australian seller that did have it! Not the one stone though, a set of 4 which included a rough spruce, a half polished, a large tumble, and small tumble.
After a lot of thinking I bought it, even though I had a very strong feeling, almost a knowing, that as soon as I'd bought it they'd put another set online that would resonate better. I even considered messaging them to ask.
And guess what... they did put a set online that resonated way better! Doohh... Now what?
Thinking, feeling, doubting, but yesterday I sent them a message to ask if I could swap my order for this other set.
Doubt set in again, I was driving myself nuts, hihi.
Then around midnight the reply: Yes it was possible, no problem!
YESSS!
I sorted it before bed and slept really well knowing that I finally found the right ones for me!

So weird, I was only looking for the one vivianite stone, would've been happy with a nice slab or tumble. No way had I thought or expected to find and buy a set! I had no idea some would even sell a set.
With the first set I'd been thinking of selling a few of the stones maybe, but with the set I now bought... no way! They're all for me.

If you've never heard of vivianite it's because it's so rare. It's not mined, but left by the ocean on this one beach in Australia. That beach is only accessible during low tide. Sometimes they walk & search for hours and find nothing, sometimes they do. Then they're still rough of course, not polished.

Here's a short description on it:
Vivianite amplifies and encourages a positive mindset and reduces and removes negative thought forms. Vivianite assists in opening and strengthening the heart chakra and enhances the feminine yin aspects of your nature. It accesses your core soul purpose and assists you in seeing what has formerly been hidden from your view.

And a another photo of what it looks like, both polished and rough pieces: 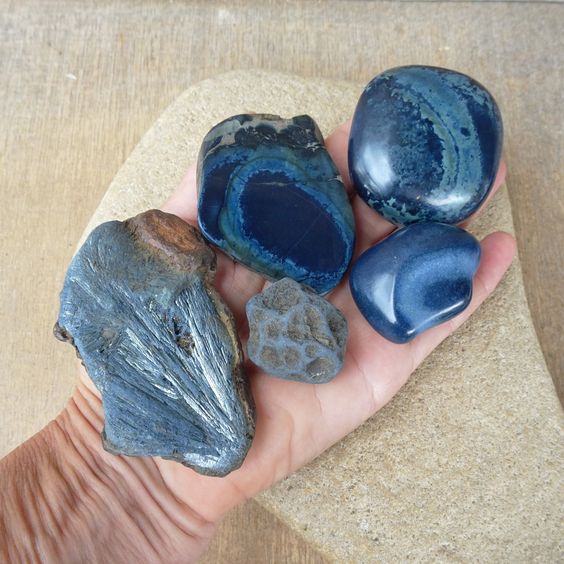 Well, my vivianite set has been cleared for transport to my country, but not on a plane just yet.
It did say it could take longer as there are still fewer flights due to the pandemic situation.
Nevertheless, I find it annoying

I got a skull within 4 days from Canada last year during the height of the pandemic days!
But alas, I have to be patient. At least it has been cleared